Having recorded over 60 albums since the late 1960’s, Phil Keaggy is one of the most admired guitarists in the Contemporary Christian music world. Phil’s talents have earned him two Grammy nominations as well as being a seven time recipient of the GMA Dove Award for Instrumental Album of the Year.

How many musicians can claim they recorded/toured with King Crimson, Peter Gabriel, Pink Floyd, Yes, and let’s not forget John Lennon? Bassist and Stick player Tony Levin can and that’s barely scratching the surface of his musical biography. When Tony’s not bouncing between King Crimson and Peter Gabriel, he’s usually found on the road with The Stick Men.

For over a decade, Tony along with drummer Jerry Marotta were the rhythm section for the classic Peter Gabriel years. Jerry’s unique percussion style has graced the music of Paul McCartney, Hall & Oats, Elvis Costello, The Indigo Girls and so many others. These days, Jerry never takes a break working with The Security Project, The Marotta Brothers Band, The Fragile Fate and Flav Martin.

The genesis of this super trio can be traced back over ten years ago when Phil, Tony and Jerry first met in Woodstock for an impromptu jam session that lead to a live show and a whole lot of improvisation left in the can. Over the years the material was revisited and reworked then left to age in the barrel a little longer.

Fast forward to 2018, the recordings are given a fresh breath of air plus added tracks to formulate a collection of actual songs. The end result is executive producer Paul Grimsland finally getting to tick off a box of his Bucket List. Like a fine wine, The Bucket List has been aged to perfection and is ready for consumption from an audience thirsting for this musical delight.

What the Fans are Saying About The Bucket List

jasondmoore1970 – “Hints of jazz, rock (prog), and folk–you need to add this album to your bucket list!” Favorite track: Carved in Stone

maxgrfx – “I have been a big fan of all three musicians for a long time, this is a great collaboration! Rock on Phil, Tony & Jerry.” Favorite track: Sometimes We Up.

Yianni D – “I am a huge fan of Keaggy’s instrumental work. This newly released project doesn’t disappoint. It is filled with jazzy improvisations that grow on you more as you listen to the CD multiple times.” Favorite track: Caravan

Martin Emerson – “Brilliant blending of the playing of three superbly talented musicians. Phil’s lead guitar complements rather than dominates the drum and bass of Jerry Marrota and Tony Levin. The guitar and bass just flow out of each other with the drums complimenting and holding it all together. Though it has its high points it is a largely mellow album, but something you want to take time out to listen to rather than play in the background. Wonderfully brilliant collection of music.” Favorite track: Caravan

What the Press is Saying About The Bucket List

SoundPress – “Sure – Keaggy, Levin and Marotta – might sound like a law firm but the music they make is so good it should be illegal.”

Progressive Music Planet – “The Bucket List is essential listening for anyone who is fan of great music.”

Baby Sue – TOP PICK! – “It’s chock full of superb and complex modern progressive rock with a heavy emphasis on technique and style. There are those cases in the world of music where tons of experience results in musicians losing their drive and inspiration. The opposite seems to be the case here.”

Something Else Reviews – “Sure, the world probably doesn’t need another supergroup. Well, after listening to The Bucket List featuring guitarist Phil Keaggy, bassist Tony Levin and drummer Jerry Marotta, we are glad there is room one more.”

Sea of Tranquility – “WOW! it’s beyond tasty. Sometimes I think Allan Holdsworth is flowing into my ears,but Phil is playing of course… The production is stellar. I’m giving The Bucket List 5 stars.”

All About Jazz – “Keaggy, Levin and Marotta have created an album with enough variety and character to demand repeated listens. If you crave flawlessly performed and beautifully produced instrumental jazz fusion, The Bucket List is for you.” 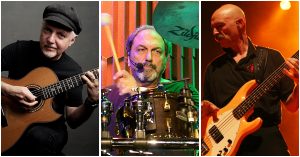